“Ironclad,” a film now in limited release, depicts the events surrounding the siege of Rochester Castle in England in the year 1215. The movie is kind of a medieval version of “The Seven Samurai.”

The historical background of the film goes like this. After having been forced to sign Magna Carta which provided rights to Englishmen that the Crown could not take away, King John had second thoughts. So he gathered an army to crush the nobles who had rebelled against him. Rochester Castle, near the south east coast of England, was all that stood in his way. The fortress was held by about a hundred or so knights and men at arms. John eventually took the castle by starving out the defenders, but by then it was too late. The nobles, along with some French allies, had raised an army to oppose John, who died about a year later.

In the movie, Rochester is held by a tiny, rag tag band of heroes led by a Templar knight named Marshal, played by James Purefoy. The band of heroes includes a knight and his squire and various ruffians and ne’er-do-wells picked up along the way. Derek Jacobi plays the ineffectual lord of the manor. Kara Mara plays his lady with whom sparks fly with Marshal.

King John, played with evil panache by Paul Giamantti, lays siege to the castle with an army of Danish mercenaries led by a big, hulking Viking-type named Captain Tiberius. Attempts to bombard the castle or take it by storm fail. So John proceeds to try to starve the garrison out.

The movie depicts the rigors and despair of what it is like to be under siege without much hope of relief. At various points our heroes turn on one another. But the theme of giving ones all for freedom shines through.

As in real history, John attempts to break through the castle walls by digging a mine, herding forty pigs under the walls, and then setting the pigs on fire. This is rough for the pigs, but the idea of that pig fat provide a fire hot enough to bring down half the castle, which it does.

Unlike real history, the surviving garrison makes a last stand in the chapel. There is a duel between Marshal and Captain Tiberius. But just as it seems that all hope is lost, the French allies appear and drive John and the remnants of his army away. The squire, Marshal, and the lady are all who are left, having saved the seeds of human freedom in England.

The violence is brutal and the atmosphere is suitably grungy as befits the Middle Ages. But “Ironclad” does make for a trip to the past that is all too rare these days of super heroes and sequels. 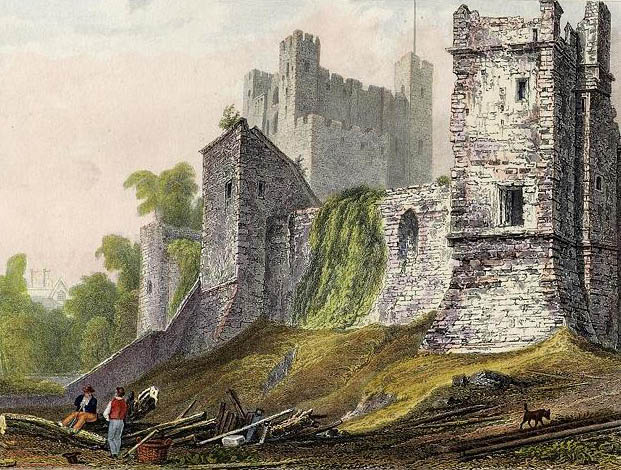