Natchez, Mississippi, was once home to a building known as Goat Castle by locals. This building was rumored to be one of the most haunted places in the entire state and city.

A huge plantation house once sat in the part of the city now known as Glenwood. This section of the city was actually named after the official name of the plantation, before it earned the Ghost Castle moniker.

Jane Merrill and Duncan Minor were close friends, and became close friends with Dick, the son of a local minister. Merrill was a gorgeous and popular young girl in the town, and there didn’t seem to be anyone who didn’t like her. She traveled to Europe, and upon her return embarked on a relationship with Minor. Their friend Dick also started his own relationship, with Octavia Dockery. The two couples quickly began spending time with each other, but things suddenly went wrong.

Something happened that cause the friends to split, though no one is quite sure why. A few months later Jane and Duncan called off their engagement. The two were actually cousins and rumors swirled that the man’s mother had put her foot down at the arrangement. After her father died in 1883, Jane inherited a large amount of money. Despite that, she allowed the bank to foreclose on her family home.

Jane’s behavior grew further erratic as she refused to see anyone but Duncan, and kept herself away from everyone else. Soon Duncan began exhibiting the same behavior, and began spending more time with her. Every night the couple met, and every day he would go back to his mother’s house.

Though the couples refused to speak, Dick and Octavia actually lived right next door to Jane. At the same time that his former best friends were exhibiting odd behavior, Dick bean acting odd too. He began suffering from panic attacks, depression, and abhorred everyone except for Octavia. He also became quite skittish, and was spooked easily. Dick and Octavia lived together in the plantation known as Glenwood for years, but when money stopped coming in, they stopped trying to keep the plantation together.

Jane finally decided that something needed to be done about the house next door. Animals ran wild, the roof was caving in, and the yard was untended. Jane and Duncan secretly planned to purchase the plantation through the county, which wanted its back taxes. Octavia stopped the couple in their tracks by having Dick declared mentally incompetent and appointing herself as his legal guardian.

When Jane killed one of his pet goats for walking onto her property one too many times, Dick called in the police. Though the charges were dropped, Dick’s formerly beautiful plantation home was given the nickname the Goat Castle due to the animals that ran free. Imagine the midst of Mississippi in the middle of summer with goats running free, doing their business wherever they felt. It’s a wonder that Jane could even breathe!

In 1932 Duncan stopped by to visit his beloved and found something gruesome. A trail of blood led down the middle of the driveway, and it was clear that someone had attack Jane in her home. That same night a search party found her body in the woods. She had been shot, then dragged from the house.

Octavia and Dick were the prime suspects, and everyone began to dig into their past. Photographers eagerly snuck onto their property to take pictures that they sold to every newspaper willing to make a deal. No one it seemed really knew how bad things were in that house.

The entire house was covered with filth. The animals roamed free, while the house itself was literally collapsing and falling in on itself. Bugs and vermin infested every piece of fabric they could find, and it was clear that no one had cleaned the inside in years. Some were horrified to learn that Dick had allowed items belonging to famous southern leaders to be destroyed by the animals.

Those that did venture inside eagerly left with their hands full of personal belongings. It’s unknown exactly how many valuable antiques and personal effects were taken, but very few things were still there when the couple returned. This actually shifted public opinion in their favor, and the case was dropped.

Just a few days later a man by the name of Pearls had been killed after trying to escape police. The man was holding a revolver at the time, and it matched the one used to kill Jane. They eventually found a woman in town who admitted to the killing. She claimed that she was with Pearls when he attempted to rob the house. When the woman appeared, Pearls shot her and dragged her out of the house. Officially the case was closed.

Octavia and Dick turned their lives around rather quickly by offering tours of the plantation for a small fee. In addition Dick would sit in the house playing the piano, while Octavia led the tours.

At the same time locals began whispering of the odd sites and sounds heard in the woods. Many believed that Jane was back from the dead. Some claimed to see the woman still wearing the clothing she wore the day she was murdered. Others reported that they could hear her moaning and crying in the woods.

Dick and Octavia passed away within a year from each other, and the Goat Castle was torn down. Following their deaths local began seeing a young woman resembling Octavia in the woods, and hearing the sounds of piano music. Today the area is a newer subdivision, but some still believe the ghosts remain. 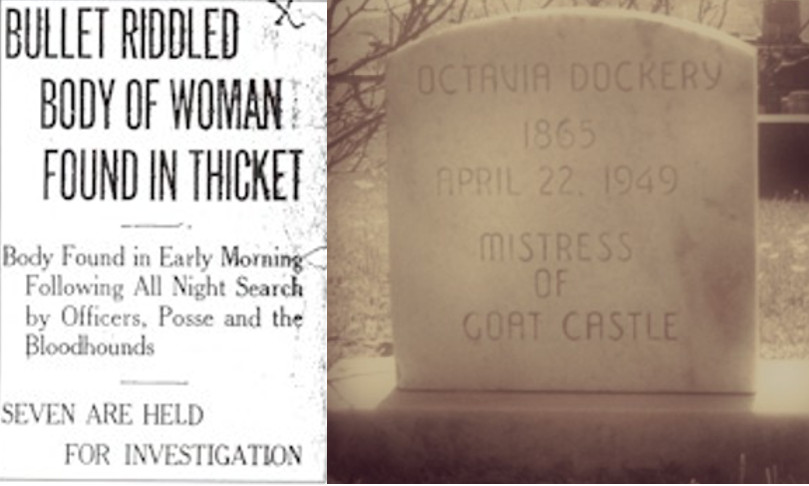